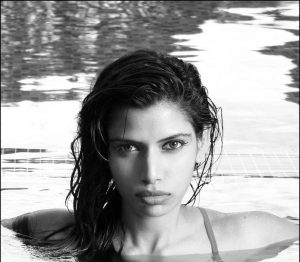 Tell us about yourself and how many books you have written.
I was born in Kuwait. But, hold a British citizenship. My father (Mario Daniel Alvares) and mother (Late Debra Rodriguez) both worked for the airline industry, making about half my growing up in flights and hotel rooms of various countries.

After the early demise of my mother, we moved to Birmingham with my father’s side of the family. I’ve now moved to New York, but still have my home in England.

Cameras and books had developed a very early bond with me, which probably explains why I landed into acting (at first, theater and then films and television)
This road eventually led me into modeling. And although I loved my life as a model with my best friend – ‘the camera’, I couldn’t go on without my other best mate – ‘books’.
It’s rather bizarre considering that I’m into a profession that involves a huge gathering of people and another that is conducted in solidarity. But, I suppose, it provides for the perfect balance of touching skies while being grounded.

In 2014, I went through an intimately dark phase, lost in an eternal shell of empty darkness with no way out. And my sole companion through it was my manuscript which is now unreservedly a record of everything that transpired back then. There’s a huge part of my life underpinned in every page, shadowing every character and weaving through every dialogue.

I’d call 2016 my resurrection year, making a comeback with a photo shoot for ‘Save the Wild’ 2016 campaign with a 13 foot Burmese python in Florida, the experience of which made me more fearless as a person and my first published novel, through which I’ve been receiving a lot of love and support, making all the efforts of long days and stretched nights, worthwhile.

Apart from a few theatrical plays, that were success stories at their time, The Maze (Dark Shadows) is the first novel that I’ve written. It’s volume 1 of ‘The Maze’ Series.

What is the name of your latest book and what inspired it?
The Maze (Dark Shadows)

My biggest inspiration has been my mother, who loved reading mystery/romance novels and always dreamed of writing one but, passed away before she could bring herself to do it. She had this idea that a novel should appeal to people on every level – mystery, romance, action and humor, in equal measure. And, that’s exactly what I bring to you with this book.
So, in a huge way, this is me fulfilling her dream for her and I hope she’s as proud of it as I am.

My other crucial inspiration is my adoptive mother. It wasn’t too long ago that my father disowned me after his re-marriage and my late mother’s sister (Judy Caleb) fostered me. The legality of the adoption came through much later. But, being a single mom, with two kids of her own, she raised me like her own as well, regardless of what a piece of paper had to say.
And truth be told, I haven’t seen someone as resilient as her in my entire life. The art of delicately balancing compassion with courage makes her a force to reckon with. The main character of my novel – ‘Jennifer Campbell’ has a lot of characteristics inspired from my adoptive mom. And through her, you will learn how to power through every situation that comes your way.

Do you have any unusual writing habits?
I can’t stream my creative line of thought during the day. But, come nightfall, my train of thought works like a lightning bolt!

What authors, or books have influenced you?
It’s always been Sydney Sheldon and Nicolas Sparks.
Recently, it’s been Miranda Hart, Michael McIntyre, Jack Whitehall and Michael Whitehall.
But, in a huge way, I’ve grown up with the J.K.Rowling influence.

What are you working on now?
Part 2 of ‘The Maze’ series

What is your best method or website when it comes to promoting your books?
Any platform provided by Social Media is the best form of networking. Moreover, you get to interact directly with the very people for whom you are creating this piece of work.

Do you have any advice for new authors?
Getting published isn’t as easy as we imagine it would be when we write our first manuscript. Any new author trying to find their voice in this world would resonate with that.

But, I’ve hung up my first heart-breaking rejection letter beside my publishing contract. Not to remind me that the difference between them is a span of three long years of continuous rejections; but as a reminder to keep walking through the rough storm until I see the rainbow at the end of the lane sparkling.

What is the best advice you have ever heard?
Dreams don’t just happen to come true. You have to go out there and make them happen for you.

What are you reading now?
I’ve spent a very long period in a dark, mysterious and haunting world while driving my manuscript on its path to perfection.
I suppose, it’s time to lighten my mind up a bit with some light comedy by Miranda Hart.

What’s next for you as a writer?
The Maze – Volume 2, which will be crafted with the same precision and care, premeditated plots, twists and turns, relatable emotions, a vast array of wise cracks and romance, appealing to its readers on every level with spine tingling murders and mystery.

What is your favorite book of all time?
Well, I do have quite a lot of favorites and picking one would be utterly unfair to the others.