You are here: Home / Action & Adventure / 101 People To Kill Before I Die by Anthony O’Connor 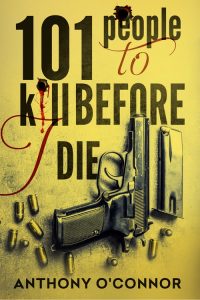 About 101 People To Kill Before I Die by Anthony O'Connor

***Will be free from Mon May 6 until Wed May 8 ***
Brian Samuals is having a bad day. A former soldier, former police officer, falsely imprisoned ex-convict, divorced, bankrupt, with a young daughter who hates him and now diagnosed with terminal cancer. He has an epiphany. He really has nothing left to lose and a lot of people have wronged him. It’s simple really. Before he goes they go, with prejudice. But be careful who you kill. Before long he is being hunted by the Russian Mob, the Monkey King Triad, the CIA, the Australian SAS and just about every cop in Australia. A rapidly escalating, way over the top, violent, mad-cap satire. Things don’t look too good for Brian. And then there is the beautiful stripper Natasha, who he’s dragged into all of this.

Author Bio:
Computer Expert. Martial arts instructor. Improvisation enthusiast. Written several novels so far with many more on the way. Doing some research into Quantum Computing and writing a book on that as well. Live in Canberra Australia. Have lived and worked in New York, USA, and London, UK. Not yet diagnosed with any terminal illnesses. I do not condone Brian’s response to this. But honestly who hasn’t sometimes wondered, ‘well what if?’