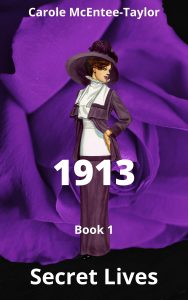 1913 is the first book in the Secret Lives series set in England and Europe before and through the Great War.

England
Having risked her liberty for the sake of the cause Lady Frances Ashbourne is terrified her parent’s will find out. Her friend Lettie Hallenby has no such qualms. Women’s suffrage means everything to her so she is horrified to find hear that Francis parents have ordered her to marry, especially when Francis won’t explain why.

The Hon Edward Pemberton is in even more trouble than usual. But this time he can’t see a way out. Desperate to avoid the consequences of his action he comes up with a solution that will come to haunt him.

Austria
Having fallen in love with Max Sommer, a penniless artist, Rosa Blum is sure she can eventually persuade her parents to accept him. If only she can keep him away from them until he makes his fortune… But her parents have other ideas and when he disappears she is devastated. Will she ever find love again?

Italy
Lucrecia Rossi had never intended for the accident to happen, but it had and now someone was dead, and it was all her fault. Will her father and brother support her or is her life over?

I am an author and publisher of military history, historical fiction, memoirs and spiritual books. I am also a ghost writer so if you have a great idea for a book and need someone to write it for you, take a look at my website for more details. I am passionate about preserving history and produce a series of books called Real Lives. Memories in Print in which I publish memoir books at no cost. For more information about these please see my website or my page on Facebook, CaroleMcT Books.

My military history books include Herbert Columbine VC, Surviving the Nazi Onslaught, A Battle Too Far, The Battle of Bellewaarde 1915 and A History of Women’s Lives in Scunthorpe.

Before retiring I worked for several years in the Military Corrective Training Centre, Colchester, the UK’s only remaining military detention centre and I now live in North Lincolnshire with my husband David and write full time.