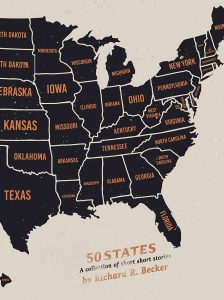 50 States is a debut collection of short stories that reflect on the human condition. The book spans several literary genres, moods, and situations across the American states between 1955 and 2020.

Two runaways cross paths in a Tennessee bus station with only one ticket between them. A middle-aged man in Illinois eyes the daily grind of a young basketball player who never boards the school bus. A family sees looters racing toward their home as they escape an Oregon wildfire.

These and 47 more stories make up the collection. Together, they provide a sampling of the American experience over the last 60 years, similar to the Spoon River Anthology by Edger Less Masters or The Canterbury Tales by Geoffrey Chaucer with more diversity.

Richard R. Becker is an award-winning American writer. His debut collection of experimental and speculative fiction began as a project to write one story a week for 50 weeks. He continues to expand many of these stories for inclusion in a second collection, and expects some will evolve into larger works.

As a journalist, Richard has written hundreds of magazine and newspaper articles, with his byline appearing in the Denver Post, Los Angeles Times, and publications for Simon & Schuster and Paramount Communications. He also scripted a documentary produced with PBS and contributed to five books, including “Beyond Generation X: A Practical Guide for Managers” and the American Ambulance Association’s “Public Relations Handbook.”

He is also president of Copywrite, Ink. and, from 2000-2020, Richard taught as an instructor at the University of Nevada, Las Vegas. Specifically, he taught writing, editing, and social media classes. He is married and has two children.