You are here: Home / Search for "Cortez Law III" 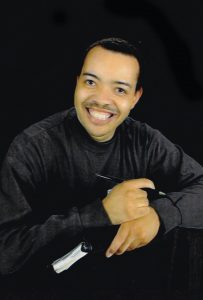 Tell us about yourself and how many books you have written.
I’m the author of five independently published books. The romance novel, My Brother’s Keeper (2001), the Atlanta X-Men Homicide Squad novels Kremlin Tide (2014), Cold Lick (2015), Serial Rites (2017). I also wrote the speculative fiction science fiction/thriller, S.Y.P.H.E.N. (2015) and the supernatural thriller novella, Evil Realms (2019).

What is the name of your latest book and what inspired it?
EVIL REALMS

Several reasons drove me to write the story. The attacks on marriages and how so few stay intact. The devil and his demons will use anything to kill, steal and destroy the family structure God instituted. Another reason was to create an African-American husband and wife ministry team. It’s rare horror tropes include a black ministry couple as the hero and heroine and I believe that’s original. I wanted to challenge myself to write in a genre I didn’t read in much. That’s on purpose in some respects too. Films helped with what was common in horror plots. Now, it’s funny. I’ve seen many horror films surprise! What compelled me to watch? At the core of a horror piece, like any story in any genre, a mystery needs solving. That key element of the Evil Realms story helped to propel the narrative drive.

An added reason entailed the speculative genre’s strong visual potential. I started out wanting to write movies and my stories receive reviews about the cinematic aspect to them.

All of that helped to create Evil Realms. Readers can gain encouragement from the story in their battles with the enemy. We can’t avoid spiritual warfare, so we have to learn how to fight. Most people might not meet all the terrifying manifestations that the Benjamins did. That’s okay! Thank God Almighty! But whatever we face, the belief in the power of Jesus Christ, the Holy Spirit and the Word of God leads to victory!

Let Evil Realms challenge, exhort and yes, spook you, to greater levels in our journeys with the Lord.

Do you have any unusual writing habits?
No, I’m pretty normal. I have a set amount of pages or words I want to write per day. I endeavor to write everyday on a project and do so most of the time.

What are you working on now?
Book #4 in the Atlanta Homicide Squad series, untitled at this point, will release. It resides in early draft form.

What is your best method or website when it comes to promoting your books?
I wish I had one or two or ten lol! But I did try to get as many pre-pub reviews for EVIL REALMS and SHADOW DOCTORS because they’re so hard but vitally important to indie authors to get. The challenging part is keeping them coming to maintain that momentum that translates into increased readership and sales.

Do you have any advice for new authors?
New authors, yes, but even to them probably old advice. Know and improve your craft. Always. That’s the principle thing. All of the marketing prowess in the world won’t matter much without that solid foundation of a solid story in all of its components. Study the craft and read often.

What is the best advice you have ever heard?
I’ve read and heard so much over the years. Wow. It may be weird to comment but nothing jumps out. Now. I’ll probably think of the profound two or three o’clock in the morning lol! Sorry.Bi

What are you reading now?
Infinity’s Reach, a post-apocalyptic/YA novel, by Glen Robinson

What’s next for you as a writer?
Continuing marketing efforts on EVIL REALMS and the launch of the next book in the Atlanta Homicide series, which is a novelette and book #3.5, titled SHADOW DOCTORS.

What is your favorite book of all time?
The Bible oscillates between the favorite and bigger than that, the most challenging.

In the vein of HEREDITARY and THE APOSTLE

Fearful and discordant ministry leaders Joel and Deborah Benjamin fight to save their crumbling marriage and their lives from a series of bizarre and disturbing occurrences that possess dark secrets.