You are here: Home / Horror / A Best of the Flashback Almanac 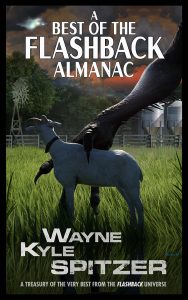 About A Best of the Flashback Almanac

First came the time-storm, which erased half the population. Then came the dinosaur apocalypse.

How did it all begin? That depends on where you were and who you ask. In some places it started with the weather—which quickly became unstable and began behaving in impossible ways. In still others it started with the lights in the sky, which shifted and pulsed and could not be explained. Elsewhere it started with the disappearances: one here, a few there, but increasing in occurrence until fully three quarters of the population had vanished. Either way, there is one thing on which everyone agrees—it didn’t take long for the prehistoric flora and fauna to start showing up (often appearing right where someone was standing, in which case the two were fused, spliced, amalgamated). It didn’t take long for the great Time-displacement called the Flashback—which was brief but had aftershocks, like an earthquake—to change the face of the earth. Nor for the stories, some long and others short, some from before the maelstrom (and resulting societal collapse) and others after, to be recorded.

Welcome to the world of the Flashback, a world in which man’s cities have become overgrown jungles and extinct animals wander the ruins. You can survive here, if you’re lucky, and if you’re not in the wrong place at the wrong time–which is everywhere, all the time. But what you’ll never do is remain the same, for this is a world whose very purpose is to challenge you, for better or for worse.

In short, it is a world where anything can and will happen. So take a deep dive into these loosely connected tales of the Dinosaur Apocalypse (each of which can be read individually or as a part of the greater saga): tales of wonder and terror, death and survival, blood and beauty. Do it today, before the apocalypse comes.

Wayne Kyle Spitzer is an American writer, illustrator, and filmmaker. He is the author of countless books, stories and other works, including a film (Shadows in the Garden), a screenplay (Algernon Blackwood’s The Willows), and a memoir (X-Ray Rider). His work has appeared in MetaStellar—Speculative fiction and beyond, subTerrain Magazine: Strong Words for a Polite Nation and Columbia: The Magazine of Northwest History. He holds a Master of Fine Arts degree from Eastern Washington University, a B.A. from Gonzaga University, and an A.A.S. from Spokane Falls Community College. His recent fiction includes The Man/Woman War cycle of stories as well as the Dinosaur Apocalypse Saga. He lives with his sweetheart Ngoc Trinh Ho in the Spokane Valley.