You are here: Home / Featured Books / A Child Is Torn by Dawn Kopman Whidden 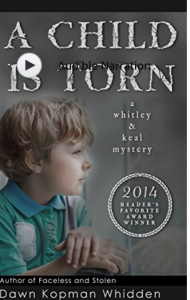 About A Child Is Torn by Dawn Kopman Whidden

A story where love begins and relationships grow when a grizzly murder is discovered.
When dependable Evan Madison fails to show up for work, police are dispatched to his home. His ten-year-old son, Brad, is discovered inside, unharmed and seemingly alone. He is stoic, sitting in front of the television playing his favorite video game, Super Mario—and he’s covered in blood.

Veteran Police Officer Marty Keal is the first on the scene. With his many years of experience, he thinks he’s seen it all. That is, until he discovers Brad’s not really alone after all. Upstairs in their bedroom lies the brutally bludgeoned and deceased bodies of both his mother and his father. When questioned, Brad confesses to the horrific murders.

When Brad is transferred to a local mental health institution for children, Dr. Hope Rubin is brought in to evaluate and treat the child. A preliminary investigation shows no evidence of any kind of mistreatment in his past. She must determine the disturbing truth: Is Brad telling the truth? Or is he covering for someone else? Detective Jean Whitely rounds out the investigative team; and she suspects there is much more to the case than what meets the eye. The happily married mother of two is unwavering in her determination to uncover the real truth about Brad. Was he abused? Or is he the product of an evil seed born to kill?

As the layers of truth about Brad are systematically peeled away, you will be compelled to ask yourself, which is the more dominate factor in contributing to who we are—NATURE or NURTURE?

Author Bio:
Dawn Kopman Whidden is a native New York author who grew up in the close-knit community of Little Neck Douglaston during the baby boomer era. She graduated from Queensboro Community college. More than twenty years ago, she traded in her days of living in the bustling city for a more serene and tranquil life on a small farm in the town of Bell, located in North Central Florida.

She is retired and shares her life and love with her husband of nineteen years and an adopted stray dog she named Casey. She has also been blessed with two beautiful grandchildren. She has several mystery thrillers out as well as a magical new middle-grade chapter book.