You are here: Home / Adult / A Dangerous Love Affair by Colin Guest 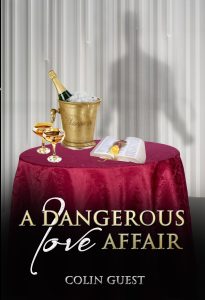 About A Dangerous Love Affair by Colin Guest

John, a struggling writer, meets Sally Johnston, a famous best-selling author at a book launch in London. To his amazement, she invites him to join her for lunch. John is thrilled when before leaving, Sally gives him her phone number and says to call her.
After he does, the couple later meets and go for a walk in Hyde Park. While sitting in the café, John is overwhelmed when Sally offers to help him with his writing. On leaving the park, they then spend the rest of the day and evening together. When John asks when he could see her again, he is astonished when Sally invites him to spend the weekend with her at her home in Guildford. She also tells John that Sally is not her real name, but the one she uses for her writing. Her real name is Tara Tomlinson
While in Guildford, the couple starts a sizzling affair and soon falls in love. However, John has no idea that Antonio, Tara’s possessive ex-lover, is not about to let him steal his woman. He wants her back and will do whatever it takes to put an end to their budding romance.
While John and Tara are enjoying themselves, Antonio makes two deadly attempts to cause John serious harm. In the first, John is lucky to survive a hit and run with only a broken leg. When he tells Tara this, she rushes up to London to take care of him. The following day, while Tara is out to fetch John a newspaper, John slumped on the sofa hears the front door open. He thinks it’s Tara, but is shocked to find it’s Sue, his ex-girlfriend. John never knew that she still had his key. Sue sits next to him on the sofa and is kissing John on the cheek as Tara walks in. She is devastated on seeing this and goes crying into the bedroom.
Sue, had no idea John was in a new relationship, so tries to explain to Tara without success. Tara is so upset; that she packs her case and leaves. After John tells Sue to leave, he calls the Carlton hotel where he thinks Tara has gone.
Although she won’t talk to him, after John sends her flowers the next morning, Tara returns to John in the evening. They soon make things up and plan on a holiday in Thailand. However, Antonio has not finished with John, who is lucky to survive, a terrifying car crash.
After recovering from his injuries, John and Tara go to Thailand. While diving, although they have a fantastic experience, Tara suffers a painful injury. They watch a live sex show which results in the couple engaging in some new sexual experiences.
However, the highlight of their trip is when John proposes to Tara. She is delighted at John’s unexpected proposal. However, when Antonio discovers this, his anger knows no bounds. He later kidnaps Tara and takes her to his villa in Italy.
On not being able to locate Tara, John is frantic. He thinks Antonio has taken her, so informs Paul, his policeman friend. After the Italian police visit Antonio, despite him saying she is not there, John thinks she is. He travels to Italy and later using a hang-glider makes a failed attempt to land on Antonio’s villa roof. When Antonio tells her of this, Tara decides that to save John from Antonio’s wrath, she must escape. It leads to a thrilling and deadly climax high in the Alps, where Tara is lucky to survive.
Once the couple is back in England, during their engagement party, John gets some great news. An old publishing friend from Tara’s past is interested in the new book John is writing. On this happy note, the story ends.

Colin Guest is an English author living in Istanbul, who until his retirement, worked in fourteen countries on high-class interior projects. Given this, he uses his knowledge of various places he visited in some of his books. Colin has published eleven books, including memoirs, thrillers and romance stories. He recently completed two unpublished romantic novels, An Unforgettable Cruise and, It Happened in Barcelona. Apart from his books, Colin has written film scripts based on two of his thrillers. He is now completing one based on his novel A Dangerous Love Affair.
Colin is passionate about wildlife and has adopted a tiger for the past twelve years.