You are here: Home / Business / A Penny Pincher’s Guide to College: Transforming your Money Mindset, What Grads Wish They Knew From the Start 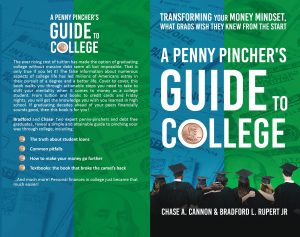 About A Penny Pincher’s Guide to College: Transforming your Money Mindset, What Grads Wish They Knew From the Start:

The ever rising cost of tuition has made the option of graduating college without massive debt seem all but impossible. That is only true if you let it! The false information about numerous aspects of college life have led millions of Americans astray in their pursuit of a degree and a better life. Cover to cover, this book walks you through actionable steps you need to take to shift your mentality when it comes to money as a college student. From tuition and books to credit cards and Friday nights, you will get the knowledge you wish you had learned in high school. If graduating decades ahead of your peers financially sounds good, then this book is for you!Bradford and Chase- two expert penny-pinchers and debt free graduates, reveal a simple and attainable guide to pinching your way through college, including:
The truth about student loans
Common pitfalls
How to make your money go further
Textbooks: the book that broke the camel’s back…And much more! Personal finances in college just became that much easier!

Author Bio:
Bradford Rupert is a US Air Force pilot and 2017 graduate of the US Air Force Academy with a BS in System’s Engineering. From a young age he was instilled with the virtues of frugality from his parents and his interest in personal finance helped shaped the trajectory of his education. In high school he set his sights on achieving wealth through a penny-pincher lifestyle and straightforward investments. Always eager to share knowledge with others, he quickly became the ‘go-to’ guy about finances in his peer groups.

Bradford is currently stationed in South Carolina with his beautiful wife, Kaitlyn, and three dogs. While C&R Books is his first official venture into the world of entrepreneurship, it is surely just the beginning!

Chase Cannon is a US Air Force Physician Assistant and a graduate of the US Air Force Academy with a BS in Biology. Always driven in his childhood he jumped between career field aspirations finally landing on the health care field, but as he grew up, he realized he had an interest in personal finance as well. He heard about those people that were debt free or “financially free” and he began to form aspirations to one day be and surpass that point. With great ambitions to shrink the amount of time to that point, he set out to learn as much as possible in both the personal finance and health care fields to make this happen. His penny-pincher philosophy is credited and pieced together through multiple resources and relationships he built throughout his journeys.

Chase is currently stationed in Arkansas awaiting the day he will be stationed with his Wife, Mandy, and his black Lab, Daphne, at the same base and starting his journey in the medical field. His multifaceted lifestyle continues to shape his impact, not only with C&R Books, but also with his relationships and endeavors to come!