You are here: Home / Featured Books / A Stormful of Pickles by Elliott Fassbinder 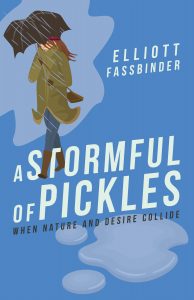 About A Stormful of Pickles by Elliott Fassbinder

The year is 2011, a week before Christmas, and the worst storm in twenty years is about to descend up Maidstone.

Mrs Francesca Dobbs, is thirty-three years old, a dinner lady, and a regular churchgoer. Ten years earlier, to escape her father, an overbearing and controlling Lutheran Pastor, she agreed to marry Mr Edward Dobbs. A dull, lumbering, and pious fellow. A rushed union proves to be just that – rushed. And Fran finds herself trapped behind walls of her own making. Still, she accepts her fate with stoicism and sinks into a life of grey domesticity. Her only buffer to the monotony of her existence are her weekly visits to a lavish tearoom ensconced in a luxurious Hotel. And for two hours, she is no longer Mrs Edward Dobbs, but a bright young thing on a grand liner exploring the globe. At home, she treats her sexual deprivation with an endless stream of pseudo erotic novels set in a bygone era.

This is all about to change…

After the school staff Christmas party, the storm hits. Fran huddles under a tree and waits for the bus. It doesn’t come. A Good Samaritan arrives, Peter Pearson, head of the English department. Though he turns out to be not so good. Peter is a sex addict. Will it be possible for Fran to repel the charms of this broken Irishman and chart a course back to tranquil waters?

The odds are stacked against her.

Elliott Fassbinder’s professional life has revolved around finance, in some guise or other. But it was his battle with alcoholism and addiction ( recovered alcoholic, 15 years ) that gave him the ideas, and the fuel, to write this story. He believes his experiences in tackling his affliction and the subsequent search for meaning in his own life has given him a profound insight into the absurdity of the human condition. He lives in Hastings, England.