You are here: Home / Fiction / A Time to Seek 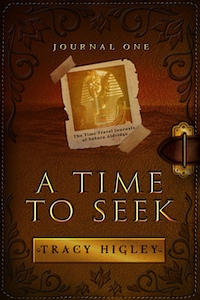 About A Time to Seek

Her Future Destiny is Hidden in the Ancient Past.
Sahara Aldridge, a young Egyptologist in 1922, is making a name for herself on the digsite soon to become Egypt’s most sensational discovery—the tomb of the boy-king, Tutankhamun.

Despite opposition from a mostly-male profession, Sahara fights to continue the legacy of her Egyptologist parents, who died tragically at sea when she was a teen.

But then a childhood friend finds a lost journal written by Sahara’s mother, hinting at the bizarre possibility of time-travel, and a crazy suspicion forces Sahara to confront a freak incident years earlier…

Is it possible her parents were time travelers?

And has she inherited this mind-blowing ability?

When the American journalist Jack Moretti begins asking too many questions, Sahara suspects he knows more than he’s telling.

Did her parents truly perish in an accident? Or did someone target and murder them because of their time traveling gift?

There’s only one way to unearth the truth.

Sahara must travel back in time, to the days of King Tut.

But the biggest surprise is yet to come… the truth about her parents, and about her own destiny, discovered in the whispers of conspiracy around the death of Egypt’s most famous Pharaoh.

But what secrets are better left buried?

TRACY HIGLEY has been attempting to time travel through the pages of books since she was a child. She started writing her first story at the age of eight, and has since authored over fifteen novels, including the acclaimed Seven Wonders Series.

She earned a Master’s Degree in Ancient History, and has traveled to Greece, Egypt, Jordan, Israel, Italy, and Turkey, researching her books and falling into adventures.

Peruse her travel journals and learn more history on her website.