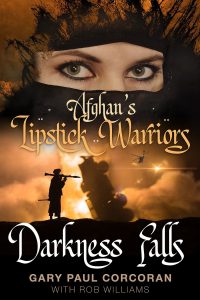 Clayton Dorn, the CIA operative and male protagonist from First Chronicle again finds his efforts to save Afghanistan hamstrung by an administration that is at once selectively bombing the Taliban, attempting to negotiate a peace settlement with them and not so secretly backing its way out the door. When Clayton learns that Saarah Khalil, his love interest from First Chronicle, has been captured by a Taliban warlord, he and his fellow maverick CIA operatives team up with what’s left of the Lipstick Warriors and embark on a life and death mission to rescue her. Crisscrossing Afghanistan, from the high valleys of the Hindu Kush to the barren red desert plains of Herat and Kandahar, they are soon on the wrong side of everyone, from the president of the United States on down to their CIA chief, and have only one clue to guide them, what a young Taliban deserter has told Clayton of Saarah’s possible whereabouts.

If you enjoy sweeping adventures with rogue warriors and colorful characters, look no further than Afghan’s Lipstick Warriors: Darkness Falls, a tale of love, war and international intrigue that will keep you riveted until the very last page is turned.

The product of an Irish/Italian family, Mr. Corcoran was transplanted from the clapboard New England of his youth to the cookie cutter, stucco subdivisions that increasingly littered the old ranches and disappearing orange groves south of Los Angeles in the 1960s. Ever rebellious, and true to the folk music/coffee house idealism that helped shape his early worldview, he chose to resist the Vietnam War, was a man without a country for several years and can count incarceration in a Mexican prison as one of his many colorful experiences from that era.

Having pursued a love of reading and writing in various forms all his life, Mr. Corcoran finally took that passion seriously around the turn of the millennium and has dedicated the remainder of his days to authorship. In completing the circle of destiny, he has returned to the New England of his youth and presently resides along the shore of Rhode Island.