You are here: Home / New Books / After The End: The World Ended Seventeen years Ago (The Emerge Series Book 1) by Jamie Campbell 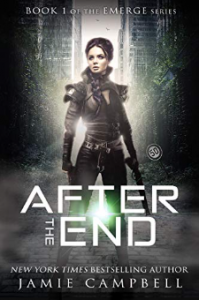 About After The End: The World Ended Seventeen years Ago (The Emerge Series Book 1) by Jamie Campbell:

Seventeen years ago the world ended. I’ve spent my whole life inside this bunker and thought I was the only remaining survivor.

Until someone knocked on my door.

Garlind barged into my life and showed me a world of possibilities outside. He promised me we would be saved from this harsh world. He offered me a future outside these steel walls. I was so excited to venture into the outside.

He said the ships in the sky will rescue us, all we have to do is get to one. It seems impossible but I trust in his unwavering belief.

I shouldn’t have. The ships are not what we were expecting.

Find out what lurks outside the bunker seventeen years after the world ended in the first book of an exciting new dystopian series.

Author Bio:
Jamie was born into a big, crazy family of 6 children. Being the youngest, she always got away with anything and would never shut up. Constantly letting her imagination run wild, her teachers were often frustrated when her ‘What I did on the weekend’ stories contained bunyips and princesses.Growing up, Jamie did the sensible things and obtained a Bachelor of Business degree from Southern Cross University and worked hard to gain her membership with the Institute of Chartered Accountants in Australia.Yet nothing compared to writing. Quitting the rat race to spend quality time with her laptop named Lily, Jamie has written several novels and screenplays. Spanning a number of genres and mediums, Jamie writes whatever inspires her from ghost stories to teenage love stories to tantalising murder mysteries. Nothing is off limits.A self-confessed television addict, dog lover, Taylor Swift fan, and ghost hunter, Jamie loves nothing more than the thrill of sharing her stories.