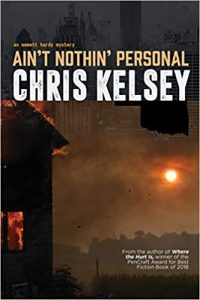 After a kidnap-for-hire plot results in the death of a young boy, Burr, Oklahoma police chief Emmett Hardy blames himself and suffers an alcohol-fueled breakdown. His life at a crossroads, Hardy checks into the hospital for treatment, only to discover upon his release that he’s been suspended from duty. When a dying prisoner contacts him about a long-forgotten unsolved case, Emmett-temporarily at loose ends-begins an informal investigation.

Soon he becomes a target of violence himself, as his investigation becomes a murder probe implicating the most powerful men in town. Hardy is forced to relive one of the most traumatic events of his childhood, and faces the possibility that members of his own family may have been involved in the crime.

Ultimately, with Emmett’s tenuous grasp on sobriety slipping and his moral foundation shifting beneath his feet, the answer to the question, “Who do I trust?” becomes a matter of life and death.

Chris Kelsey father was a jazz saxophonist and his mother a school librarian. He was raised in a succession of small towns in Texas and Oklahoma. His father endowed him with a love for jazz; his mother, a passion for reading. Kelsey began playing saxophone in elementary school and never laid it down. He received his Bachelor’s Degree in Music Education from the University of Central Oklahoma, then moved to New York City, where he made something of a name for himself playing, composing, teaching, and ultimately writing about strange and obtuse forms of modern jazz. He’s been published by a variety of publications, including Ms., Magazine, Jazziz, JazzTimes, and The All Music Guide. As a musician, he’s recorded and produced upwards of twenty albums under his own name, for the C.I.M.P and Unseen Rain labels, and his own Saxofonis and Tzazz Krytyk imprints. Kelsey’s CD, What I Say: The Electric Miles Project, won a 2013 Independent Music Award for Best Tribute Album. His books include the PenCraft Award-winning Where the Hurt Is and the Oklahoma Writers Federation award-winning Butcherville. Kirkus calls his latest, Ain’t Nothin’ Personal, “A strong mystery that clearly shows some secrets, like a few bodies, can’t stay buried.”