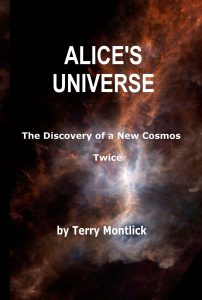 About Alice’s Universe by Terry Montlick

Professor Alice Sutton, a self-taught physicist, grew up in the Appalachian Mountains of southern Ohio. While still in her teens, she stunned the scientific world with her discovery of a fifth force of nature, with profound implications for cosmology.
She became a full professor at MIT in her early twenties. But her hillbilly ways and beliefs stayed with her, guiding her through mind-bending adventures in scientific discovery. This hard science fiction novel pulls no punches in describing the physics behind Dr. Alice’s work.
Meanwhile, rumors circulate that she’s built a time travel machine, and that it’s locked up in her research lab. World powers send out their cloak-and-dagger operatives to steal it, as well as to kidnap Alice and members of her eccentric research group. Bob, Alice’s hapless grad student, didn’t realize what he signed up for.
But the bad guys have met a powerful enemy in Dr. Alice. In addition to her backwoods wiles and her brainpower, she has some unusual abilities which keep her two steps ahead of them, while Bob, our narrator, hangs on for dear life.

Terry Montlick has degrees in biology and neurobiology. He has worked as a software engineer, semiconductor designer, cooking teacher, restaurant critic, and acoustical engineer.