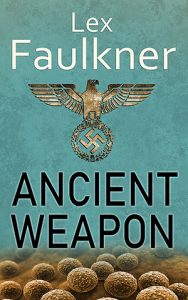 2.500 years ago, Plato’s dialogues described the island civilisation of Atlantis, which was swallowed by the sea. It was never thought to more than a legend. During a stormy night in October 1944, U-boat 303 left Germany for Argentina. Its mysterious cargo, protected by the Nazi SS and the occult Thule Society, had the potential to win the Second World War, but the submarine never made it to its destination. More than half a century later, its lethal cargo has fallen into the hands of terrorists. SAS veteran Andrew Sterling, now driving a desk at ‘The Firm’, is tasked with the investigation. In a race against time through The Azores, Austria, Mexico and Antarctica, and with the help of archaeologist Fiona Keane, he must unravel the deadly mystery, before an ancient weapon is unleashed on the world.

Lex Faulkner is the author of ‘Ancient Weapon’ – an Andrew Sterling novel. He has written and published fiction as well as non-fiction books, and has always had a keen interest in all things interesting.
He has travelled extensively in South East Asia, Europe, Africa and Japan.
Lex speaks several languages, and has lived and worked in the UK, the Netherlands and Denmark. He now lives in London with his partner and daughter.