You are here: Home / Horror / Autumn: Dawn by David Moody 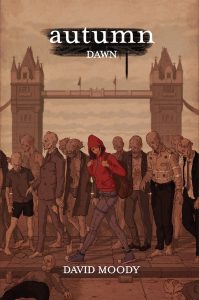 About Autumn: Dawn by David Moody

Population seven million • 99.9% of them dead • the survival of the rest balanced on a knife-edge

THE WORLD IS DEAD

Two months ago, billions of people were killed by a deadly germ. Days later, they rose up again in massive numbers. Since then, cities worldwide have become corpse-filled, rat-infested, germ-choked hellholes.

A group of people are trapped in central London, hopelessly outnumbered by the dead. They hear rumours of a safe haven in the north – a self-sufficient community where people from across the country have gathered to try and rebuild their lives. But the decaying ruins of the capital are vast and sprawling, and they’re going to need an army to get away from this place.

There are other people here, waiting in the shadows to be found. Can enough of them band together to make a difference, or has the country – maybe even the entire world – already been lost to the dead?

PRAISE FOR THE AUTUMN SERIES:

“As demonstrated throughout his previous novels, readers should crown Moody king of the zombie horror novel” —Booklist

“The best survival horror since Richard Matheson’s I am Legend.” —Wayne Simmons, Author of FLU and PLASTIC JESUS

“If you only read one book this year, read AUTUMN.” —Suspense Magazine

“By the end of the book, you will be waiting impatiently for the next instalment.” —Dread Central

David Moody first released Hater in 2006 and, without an agent, sold the film rights for the novel to Mark Johnson (producer, Breaking Bad) and Guillermo Del Toro (director, The Shape of Water, Pan’s Labyrinth). Moody’s seminal zombie novel Autumn was made into an (admittedly terrible) movie starring Dexter Fletcher and David Carradine. He has an unhealthy fascination with the end of the world and likes to write books about ordinary folks going through absolute hell. With the publication of new Autumn and Hater stories, Moody has furthered his reputation as a writer of suspense-laced SF/horror, and “farther out” genre books of all description. Find out more about his work at www.davidmoody.net and www.infectedbooks.co.uk.