You are here: Home / Horror / Bethany Chiller By Steven Deighan 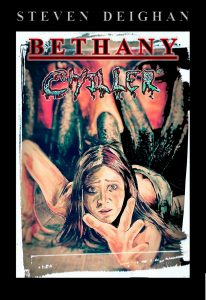 About Bethany Chiller By Steven Deighan

The life of a young woman turns upside down when demonic forces control her, and a trail of fatalities begins in her name. Can she get to grips with what is happening before Heaven tells her it’s too late?

It’s like a Carrie meets The Exorcist roller coaster ride….

“This is not a pleasant story…”

Intelligent, beautiful; 16-yearr-old Bethany Childs is now officially a young woman with her whole life ahead of her. But, that innocence is savagely taken away on the night of her birthday, and a part of her won’t let it go.

Under the wing of an age-old demon – who facilitates Bethany’s revenge by imbuing the girl with supernatural powers – Bethany reveals her story in a ‘no-nonsense’ fashion, apologizing not for her torment nor asking for sympathy, but pleading for an understanding of the demonic forces she employs, and the fatalities that ensue in her wake.

“It is not the future I saw for myself…” If Bethany is to believe in herself once again, and renounce Hell’s brutal, iniquitous ways, she will need to open her eyes and heart to a world that will never be the way she remembers. Only then can there be salvation in her name.

Steven Deighan is an Edinburgh-born, Lanarkshire-based writer of horror fiction. He has had stories published in national and international publications since the late 90s. Deighan is the writer/create of Bethany Chiller, and the graphic books Feels Like Stephen King and The Party (in limited edition 3D, on Ebay).