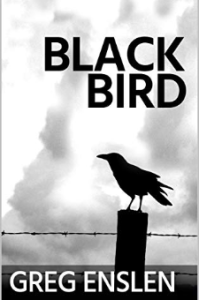 Jack Terrington, the nation’s most prolific serial killer, returns to the scene of his first murders, a small town he’d escaped only by dumb luck. Jack Terrington has an aptitude for getting away with murder; he’s been doing it for twenty years. He’s a drifter, leaving a trail of fear and death from coast to coast. And though he’s always avoided capture, he’s haunted by the memory of Liberty, Virginia—Jack had escaped capture only by dumb luck. And that’s always bothered him. Now, before he retires for good, he’s returning to the small town to settle the score.

Meanwhile, David Beaumont couldn’t wait to leave Liberty—he was tired of listening to the endless stories about what a great man his father had been, how he had saved Liberty from a killer, sacrificing his own life. David’s starting a new life, but when the killings start again, David’s the only one that can stop them. Should he return to the town he despises? And if he does, will he end up like his father—dead?”

Greg Enslen is an Ohio author of thirty-one books, including five books in the “Frank Harper Mysteries” series and three other novels. He also writes original screenplays and guides for popular TV shows such as “Game of Thrones” and “Mr. Robot.” His books are available from major retailers and on his Amazon Author Page at http://bit.ly/geauthor.

Greg lives in southern Ohio with his wife, three children, three dogs and an indeterminate number of cats. His interests include travel, reading, film and television, and yelling at various sports franchises. Greg enjoys writing late at night, after everyone else has finally trudged off to bed and the house is quiet. For more information, visit his website at gregenslen.com or check out his Facebook fan page at www.facebook.com/gregenslenswriting.