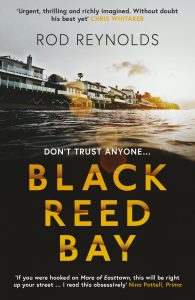 When a young woman makes a distressing middle-of-the-night call to 911, apparently running for her life in a quiet, exclusive beachside neighbourhood, miles from her home, everything suggests a domestic incident.

Except no one has seen her since, and something doesn’t sit right with the officers at Hampstead County PD. With multiple suspects and witnesses throwing up startling inconsistencies, and interference from the top threatening the integrity of the investigation, lead detective Casey Wray is thrust into an increasingly puzzling case that looks like it’s going to have only one ending…

And then the first body appears…

Rod Reynolds is the author of four novels, including the Charlie Yates series. His 2015 debut, The Dark Inside, was longlisted for the CWA New Blood Dagger, and was followed by Black Night Falling (2016) and Cold Desert Sky (2018); the Guardian have called the books ‘Pitch-perfect American noir.’ A lifelong Londoner, in 2020 Orenda Books published his first novel set in his hometown, Blood Red City. Black Reed Bay will be published in 2021. Rod previously worked in advertising as a media buyer, and holds an MA in novel writing from City University London. Rod lives with his wife and family and spends most of his time trying to keep up with his two young daughters.