You are here: Home / Action & Adventure / Blood in the Water: The Lost Tale of Captain Hook by M.A. Kersh 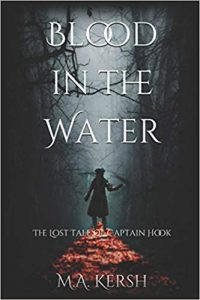 About Blood in the Water: The Lost Tale of Captain Hook by M.A. Kersh

James Hook’s story began in Wales, where he was left on the steps of the Moore Orphanage as a baby. James is bullied by Peter and tortured by a fairy. After a nun sacrifices her soul to save him, he vows revenge against those responsible, but Peter outwits him and makes his own deal with a fairy. In exchange for the powers of the fae and life in the Nine Realms, Peter Pan will spend his immortal life taking children to the lost island known as Neverland and stealing their souls. When Hook discovers the dark truth of Pan and his powers, he will travel to the worlds beyond the hidden veil to destroy Pan and set the souls of Neverland free. The journey is one of magic, true love, and redemption. In this recovered tale, you may find what you formerly believed to be a lie. But, fear not, my darlings. There is always a wish to grant you a second chance.

Author Bio:
In this debut novel from M.A. Kersh, the true events from the famous childhood story of the much-loved Peter Pan, and the villainous pirate known as Captain Hook is finally revealed for the very first time.