You are here: Home / Fantasy / Blood of the Prince: Omnibus By R.L. Dean 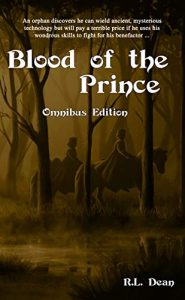 About Blood of the Prince: Omnibus By R.L. Dean:

An orphan discovers he can wield ancient, mysterious technology but will pay a terrible price if he uses his wondrous skills to fight for his benefactor.

As winter settles in an old man sits down to pen the tale of his youth. A sense of melancholy, of love lost, and the disappointment of labors performed in vain cloak his shoulders as he leans forward, the quill in the weathered knuckles of his hand hovering over parchment. Asking himself where it all began was unnecessary … time could not erase the flames that leapt in his mind’s eye.

Herein contains Patrin’s complete first mission, Greater Things than Thou, All Things Ruin, and That Which Remains From his early childhood memories, kidnapping, salvation, and finally, the betrayal of his best friend.

Author Bio:
As a native Texan in the early 90s R.L. Dean created door programs for bulletin board software. In 1998 R.L. became a Christian and has taught expositional Sunday School at his local church for eight years. He currently resides in southeast Texas with his wife of twenty years, ten cats, and two stray dogs. He works in the IT industry as a technician for a large restaurant chain, but his dream is to work professionally creating novels, television shows, and films.