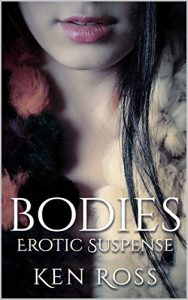 This is the third book in the Ken Ross Romantic/Erotic Suspense Series. WARNING: This book is shocking, in more ways than one. After WASTED PAIN & PROTECTION comes the disturbing story of BODIES in which Jerry and his gals are settled in their house enjoying what’s always been at the heart of their lives, sex, until Jerry strays, and then… hey, things get a whole lot worse. One blunder, a major incident, and then they head to the greatest shocks of their lives. Although they’ve thought sex is everything, they eventually learn that there is no sex without freedom. Who survives to the last page? This story is not for the fainthearted, or for those searching for sweetness and light. It’s damned shocking. It’s sizzling hot. Its characters are even hotter. And after BODIES Jerry, Patsy & Erica’s adventures continue in three more shockers, MAMA, BROKEN SISTERS, and GOODBYE VIOLET.

Author Bio:
Ken Ross was born in 1953 at Westow in the East Riding of Yorkshire. As a child, he lived at Barmby Moor, Pocklington, and York, before his parents moved to Leeds in 1964. He attended Harehills County Secondary School until leaving in 1969. Married in 1971 he had an assortment of jobs while honing his writing skills. After his divorce in 1986, he brought up his 8 children alone and eventually succeeded in getting published. At first, he wrote articles for magazines but has gone on to write over fifty books, the first twenty-odd being solely for children. He is proud of his novels, ‘A Cross Of Crocuses’ and ‘Ann – irresistible spirit’. He currently lives in Osmondthorpe, Leeds.

Ken’s 2019 works include the romantic/erotic series of novels WASTED PAIN, PROTECTION: sex, revenge & romance, BODIES, MAMA, BROKEN SISTERS, and GOODBYE VIOLET. These six novels are interlinked with the characters all living in the same house that is first occupied by Jerry’s Pa and Ginger in WASTED PAIN, then by Jerry and his gals in subsequent stories. The central characters are Jerry, Patsy, and Erica and their adventures often occur close to the grim town of Crickenville, Ohio.