You are here: Home / LGBT / Bound by Kat Kinney 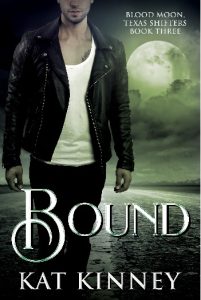 About Bound by Kat Kinney

Teacher by day, fantasy writer by night, West Caldwell was forced to live in secret long before werewolves and vampires accidentally outed themselves on social media, causing a worldwide freak out. One slip of his rare Omega magic bound Topher Greer to him against his will. Now that magic threatens to fracture even further—just as shapeshifters are being abducted off the streets of Austin, Texas.

Topher Greer, EMT and former prisoner of the most dangerous vampire coven in Texas, is one of the few who can sense the presence of undead blood. He’s been marked for death by the Vampire Nation—who hold his brother hostage. Things with West Caldwell are… complicated. Pack law doesn’t forbid relationships between newly changed werewolves and their sires. But West has more walls around his heart than a high-security vampire prison.

To avoid the coming war and save his brother, Topher will have to turn to the most unlikely of allies—and untangle the feelings between him and West Caldwell for once and for all.