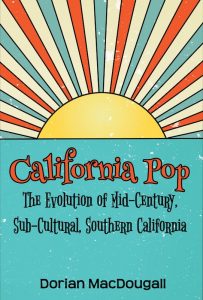 About California Pop: The Evolution of Mid-Century, Sub-Cultural, Southern California

In 1542, Spanish explorers landed upon the shores of Southern California expecting to find a terrestrial paradise and instead, found only a burnt-over desert. But during a four-hundred-year-long metamorphosis carried out by thousands of dissimilar individuals of far-flung imagination and fixed purpose, Southern California was transformed into the nation’s most promised land—a tangible symbol of all the best life had to offer in mid-twentieth-century America. And at that glorious pinnacle of middle-class, suburban grace, it would remain no more than twenty years. But to this very day, it is those few years that continue to define the image and culture of Southern California in the imaginations of people from all around the world. California Pop tells the tale of how this once reviled region became one of the most celebrated slivers of coastline on the planet.

Dorian MacDougall was born and raised in the suburbs of San Diego, California during the heady days of the Cpop era. A true dabbler of arts, he has, at various times, worked as an actor, a musician, a documentary filmmaker, and a writer for television, technical publications, and works of non-fiction. Between writing projects, he restores and repairs old guitars.