You are here: Home / Featured Books / Chaser by Dharma Kelleher 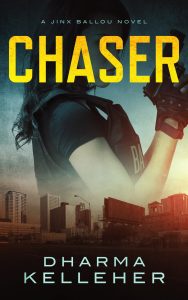 About Chaser by Dharma Kelleher

In the macho world of bounty hunting, Jinx Ballou must prove she’s better than the rest.

After a Phoenix newspaper outs her as transgender, bounty hunter Jinx Ballou is furious to learn she’s been blackballed by local bail bond agents. But she’s not giving up without a fight.

Jinx convinces one desperate bail bond agent to hire her to return a young female murder suspect to jail. She’s confident she can apprehend the fugitive woman, even after more seasoned bounty hunters failed.

When the trail puts Jinx in the crosshairs of a ruthless gangster, she questions whether the woman she’s after is truly a murderer or another victim. As she closes in, Jinx must push her skills, her body, and her luck to the limit.

But will she survive long enough to uncover the truth and return her fugitive to custody?

Chaser is the first novel in the Jinx Ballou Bounty Hunter series, although each books in the series can be read as a standalone. This white-knuckle roller coaster ride will keep you turning the pages into the wee hours. You’ll cheer for this diverse cast of badass characters who sometimes cross the line in pursuit of justice.

Curl up with your copy of Chaser today and join Jinx as she proves she’s one of the best bounty hunters in Arizona.

Dharma is one of the only openly transgender authors in the crime fiction genre. Her action-driven thrillers explore the complexities of social and criminal justice in a world where the legal system favors the privileged.

She is a member of Sisters in Crime, Mystery Writers of America, and the Alliance of Independent Authors. She lives in Arizona with her wife and a black cat named Mouse.