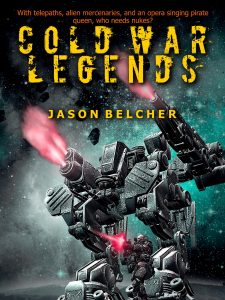 Step inside a Cold War nuclear missile base in 1986 under a terrifying attack by alien mercenaries, and learn the real reason why they were sent. Learn the secrets of a pair of Soviet spies who create the a popular television channel which Americans can’t stop watching. Come with Lady Negato, an opera singer who survives Hiroshima to help the allies chase war criminals across the south pacific, only to be transported to a distant world by a secret Japanese research project in this epic adventure consisting of four inter-related novellas.

Jason Belcher is a former U.S. Air Force Captain and Iraq Veteran who has been published in the Huffington Post and Lexington Herald Leader. Jason is an avid runner, tech enthusiast, and news junkie. He is the owner of VR Heroes, a virtual reality business in his hometown of Pikeville, KY.