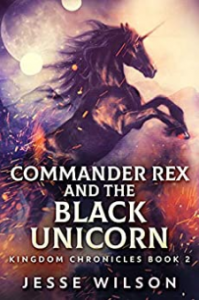 About Commander Rex And The Black Unicorn (Kingdom Chronicles Book 2) by Jesse Wilson:

The unicorns are returning.A prophetic event heralds the return of the Black Unicorn: a mythical beast banished by the Gods ages ago. Commander Rex and his team is summoned by King Lexam to investigate the cause of this strange event. The unlikely unicorn hunters don’t believe in the Black Unicorn at all, but when summoned by the king, you don’t say no.But soon, it becomes clear that there might be more to the events than just a prophecy. They must find who is responsible… and fast.

Author Bio:
My name is Jesse Wilson. I live in South Dakota and I am 36 years old.

I am also a lifelong Godzilla fan.

A long time ago, I realized that the world inside my head was more appealing than the world I lived in on a day to day basis most of the time and real life was something I was never particularly good at. There was always something missing and I never seemed to find it.

I had dabbled in the art of writing since as long as I can remember. Silly stories that never really amounted to anything, while most people give this up and move on, I just kept moving forward. Never stopping, by the time I was 13 years old I had managed to create my first Godzilla fan fiction stories. None of them were that great, but not too many people are at the beginning of anything.

At 15 had started to role play online, free form role playing, they called it. This is where I learned how to show things and not just tell them. This was way before the online games they have today. For fun I used to help other people create their character profiles, I got rather good at it, too. This is where I became addicted to writing.

I wrote my first “novel” when I was 16 years old in High school, it started out as something I just wanted to try, but the thing ended up saving me in English class when I told the teacher and she allowed me to turn the thing for extra credit. I still don’t know how that ended up working, but it did. I managed to turn the thing into a trilogy before I graduated high school.

Unfortunately, the whole thing was lost when a storm rolled through, teaching me the importance of backing everything up.

After graduation I just got a job and committed myself to “real life” everything that wasn’t needed took a back seat, writing included.

In 2006 I rejoined the online world of roleplaying and rediscovered why I liked to do it. From 2006 to 2010 I managed to create one of my favorite characters, Bob the Supervillain.

In the summer of 2010, I began the thing that would unknowingly become an epic. The Delta Squad series, inspired by the people I worked with at the time. It started out as two thousand word drop in the bucket. By the time 2013 came along, the series had evolved into a thirteen-book series! However, it was all a hobby. Something I wanted to see how far I could take it.

2013 was a major turning point in my life. I contracted a near lethal MRSA infection. I was in the hospital for three weeks and almost didn’t make it. Up until then I had just decided to “do my best to get by,” facing death in such a painful way and making it this time, made me want to try a little harder. I decided that I would do my best to get the Delta Squad books published. Not self-published, but actually done by a real company.

However, I wanted to do more. Delta Squad was my main project but writing offered so much more. So, I dived into the world as deeply as I could. I discovered NaNoWriMo in 2015 and gave it a shot. I’ve done it three times and won each time, I’m happy to say.

In 2016 I discovered Kaiju fiction was actually a thing. So, I wanted to try my hand at it. I created a monster called Narbosaurus! Everyone I told the name to, thought it was one of the worst names they had ever heard, and idea too, even though I never revealed very much.

So, I wrote it anyway, edited it the best I could and sent the thing in. My very first book I had ever sent in. I had no expectations. To my surprise they accepted it! My very first book was accepted, the thing everyone I had told in advance had said was a bad idea, it worked out way better than I hoped it would.

Now, in 2018 I hope to see my writing career go further than I ever thought possible, and with time I know this will just be the first steps into something truly amazing.