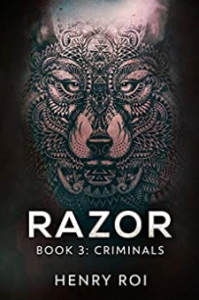 Razor barely survived the fight with Anh Ho, the Elder Tiger of the Vietnamese Mafia.Gangsters raided his domain. Professional mercenaries murdered his allies in the Dragon Family, and kidnapped his woman’s parents.His team barely survived, but the battle with the Tiger Society has just begun. And now, the authorities are also involved. Razor’s ingenuity and his team’s rare abilities are hard pressed in a war of wits, tech, and physical mayhem, as the final confrontation draws near.

Author Bio:
About the AuthorHenry Roi was born and raised on the Mississippi Gulf Coast, and still finds his inspiration in its places and people. As a GED tutor and fitness instructor, working both face to face and online, he is an advocate of adult education in all its forms. His many campaigning and personal interests include tattoo art, prison reform and automotive mechanics.He currently works in publishing, as an editor and publicist. He particularly focuses on promoting talented indie writers – arranging reviews, delivering media campaigns, and running blog tours. If you’re not lucky enough to catch him fishing round the Biloxi Lighthouse or teaching fitness in your local gym, he can usually be found on Twitter or Facebook @HenryRoiPR.