You are here: Home / Featured Books / Crushing on Kate by Theresa Paolo 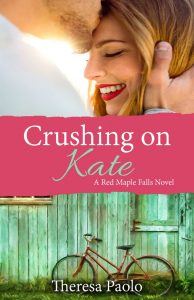 About Crushing on Kate by Theresa Paolo

It was love at first sight until he opened his mouth.

Born and raised in the small town of Red Maple Falls, it’s impossible for Kate Hayes to meet a guy she hasn’t known since first grade. When she is approached by a ridiculously attractive, unfamiliar face during one of her glass blowing demonstrations, she can’t help but get her hopes up. Until he opens his mouth.

Caleb James established his bike shop in the middle of nowhere to escape his past. When the owner of the adjoining business blocks his parking spots to put on her “arts and crafts hour” he has no choice but to shut her down. What he doesn’t expect is the fresh-faced beauty who refuses to accommodate his requests. Nor does he expect for the small town to be filled with big personalities who feel the need to force their way into his life, refusing to leave him alone.

While Caleb continues to fight Kate, and tries to keep his distance, holding on to a vow he made to himself to never trust again, she tears down every wall he’s ever built. Will the promise of a future with Kate be enough to break the promise of his past?

Author Bio:
Theresa Paolo lives on Long Island, NY with her fiancé and their fish. She is the author of NA and Adult contemporary romances. Her debut novel (NEVER) AGAIN, released in Fall 2013 with Berkley (Penguin) and the companion novel (ONCE) AGAIN released Summer 2014. Mad About Matt, the first book in her new Red Maple Falls series, released March 2017.

She loves to write heartfelt romances with a dash of fun and a side of spice. When she’s not writing, she’s reading, brewery hopping, daydreaming, wasting time on Pinterest, or can be found chatting away on Twitter and Facebook. She also writes YA romance under Tessa Marie.