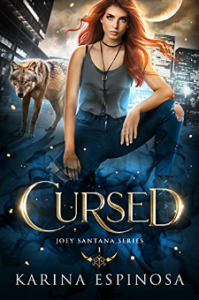 Story of my life.

The name’s Joey Santana and my twenty-fifth birthday didn’t necessarily go as planned. In a world where supernaturals and humans live together, I was attacked, then saved by none other than the Alpha of the Los Angeles Pack. But with survival came a price. And I wasn’t sure if I was ready to pay it.

Fast forward and I’m waking up the next morning in some stranger’s house with a half-naked man coming out of a bathroom. Awkward. And it so happens to be the Alpha’s son, Reed Stone. Right off the bat, he knows I’m trouble with a capital T since there haven’t been any humans turned into supes since supernaturals were outed five years ago. But if he thinks I’m going to sit back and take whatever he’s got coming, he’s painfully mistaken. I might have been human, but I now have canines, and I bite.

We’re forced to work together to wade through the supernatural politics and threats that await me. Our personalities clash in a battle of wills for dominance as the two of us grow closer together to solve the biggest mystery of all—why the hell would my father want to kill me?

Karina Espinosa is the Urban Fantasy Author of the Mackenzie Grey novels and The Last Valkyrie series. An avid reader throughout her life, the world of Urban Fantasy easily became an obsession that turned into a passion for writing strong leading characters with authentic story arcs. When she isn’t writing badass heroines, you can find this self-proclaimed nomad in her South Florida home binge watching the latest series on Netflix or traveling far and wide for the latest inspiration for her books. Follow her on social media!