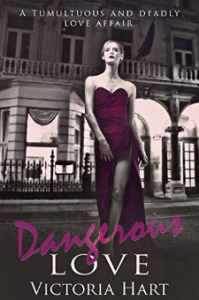 About Dangerous Love: A Tumultuous and Deadly Love Affair by Victoria Hart:

A suspenceful love triangle with tumultuous and deadly twists and turns that will keep you guessing till the endRose and Adam are engaged to be married. However, shortly after her engagement, she meets Brandon. He’s loud, obnoxious and careless – everything the young woman despises. As she spends time with him, Rose is more and more drawn to him, and soon enough, she falls in love with him.So, she finds herself in a dilemma – she likes Adam, he is like a brother to her and more, having lived with his family since her parents died when she was young. She loves Brandon who is everything Adam is not. After months of painful indecision, she finally decides whom she’s going to choose. As she’s driving to Brandon’s luxurious villa to inform him of her decision, she gets shot at. Her car crashes and is turned into a wrangled mess, but she escapes with a few bruises.Who wants to kill her, and why? To find out, scroll back up and click the BUY NOW button at the top right side of this page for an immediate download!Read on your favorite devices such as Kindle, IPhone, IPad, Android cellular phone, tablet, laptop, or computer with Amazon’s free reading Kindle App.

Author Bio:
Victoria was born and raised in New Zealand. She studied literature in England before settling down in Australia with her family. Victoria has been writing romance stories since she was a teenager and has always been fascinated with the fairy tales of her childhood. She now writes fairy tales with a modern twist with her royal romance stories. Her debut novel Letters from a Prince in the series The Royals of Heledia was released in November 2016. She is now working on a follow-up book in this series. You can follow Victoria on her Facebook page: https://www.facebook.com/Victoria-Hart-359538327723831/