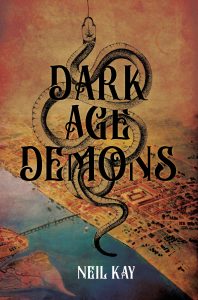 Dark Age Demons – A Historical Horror Thriller.
Britain, 540 AD. Britons, Saxons, Jutes and Angles war with each other for land. They have no idea they are all just meat to the monsters that dwell in the abandoned Roman city of Londinium.

The monster’s leader, a former Roman soldier turned demon, sends his creatures across the land to forage for food and increase their numbers.

When one of these creatures destroys their village, two brave Saxon sisters and their stubborn but determined brother form an unlikely team-up with a Briton bandit who has knowledge of the islands darkness. Saxon newcomers from the old country and a Briton-born slave, raised and abused by Saxons complete the fearless squad.

Vampires, shapeshifters, and unnatural beasts chase and confront the heroes forcing them to turn their attention to the smoldering ruins of Londinium.

Neil Kay is a British teacher currently living in Yokohama, Japan. He has been interested in both history and creative writing for as long as he can remember. His favorite historical fiction novels are Shogun by James Clavell, Hawaii by James Michener, Hillary Mantel’s Cromwell trilogy and The Baroque Cycle by Neal Stephenson. Dark Age Demons is his first attempt at trying it for himself. Away from writing his interests include Indian food, Kirin beer and Crystal Palace FC.