You are here: Home / Fantasy / Daughter of the Yellow Dragon by Starr Z. Davies 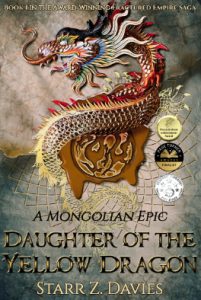 About Daughter of the Yellow Dragon by Starr Z. Davies

“A Mongolian Game of Thrones!” – Katherine Roberts, author of Prince of the Wolves: The Legend of Genghis Khan

Genghis Khan united a nation and created a vast empire for his heirs. But after 200 years of civil war, his empire has fallen into the dark ages.

Mandukhai dreams of being a fierce warrior woman, but her dreams are shattered when she is forced to become the second wife to the Great Khan.

Unebolod spent his life in the Great Khan’s shadow, preparing for a day when he can seize control of the empire. But when he forms a dangerous alliance with Mandukhai, it swiftly transforms into a passion that could destroy them both.

Just as the two are certain their fate will one day bring them together and make Unebolod the next Great Khan, a young prince surfaces to steal the Great Khan’s attention and the hearts of the nation.

Daughter of the Yellow Dragon is the first book in a gripping, gritty historical fiction series based on the epic life of one of the most underrated women in history. The series draws you into a world of brutal Mongol steppe life, deadly political games, and supernatural beliefs.

STARR Z. DAVIES lives in northern Wisconsin with her husband, two kids, and imaginary pets. She spends her days writing by the lake, dreaming up new ways to torture her characters. At night, she tends to binge-watch movies and television shows. Starr first realized she wanted to write when in 4th grade, when she wrote a scary story about a haunted house. Her greatest inspirations were authors like J. R. R. Tolkien, Brandon Sanderson, and Robert Jordan (who continues to thread roots in all her work).

Starr is best known for her Powers Series, a YA Dystopian trilogy about a future world with superpowers. She also wrote the Fractured Empire Saga, an award-winning medieval Mongolian epic based on the true life of Mandukhai the Wise.