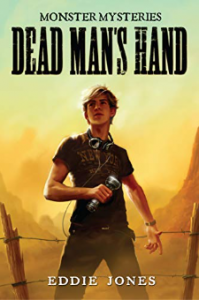 In Deadwood, Nick Caden discovers the body of Billy the Kid. Is there a “ghost” killer running loose in this old west ghost town?
It’s all for show…right? Nothing more than Hollywood theatrics? “This is an authentic old west ghost town,” the sheriff tells Nick. “Around these parts the dead don’t stay dead.”

But Nick Caden’s vacation becomes a nightmare when this “living” ghost town takes a deadly turn toward trouble. Soon Nick finds himself trapped in a stable with the infamous outlaw Jesse James. The shooter whirls, aims and… vanishes. Great theatrics, Nick thinks. Only then does he discover the body of a real dead cowboy.

Soon Nick is caught in a deadly chase—from an abandoned gold mine, through forbidden buffalo hunting grounds, and across Rattlesnake Gulch. Around every turn he finds another suspect. Will Nick solve the murder before his family leaves Deadwood? Or will the town’s desperate need for tourists’ income bury the haunting truth that something “ghost-like” lives in Deadwood?

Complete the Dead Man’s Hand: Official Criminal Inquiry: Write a Book Report – Catch a Crook to see if you have the makings of a homicide detective. With this easy-to-follow “homicide detective” worksheet, you can fill in the answers to the questions while you read. When finished, your book report should be thorough enough to convict a killer! Check out the book report questions on this page under the “From the Author” section.

Awards for the Monster Mysteries series:

Praise for the Monster Mysteries series

“This series has the same longevity and wholesome quality as “The Hardy Boys” and “Nancy Drew” but the author writes for today’s youth.” ~ Amazon review

“I enjoyed reading this fun, suspense adventure. Great book for middle school. Teen boys and girls will enjoy it, too!” ~ Amazon review

“I would think it would be for ages nine and up. A good Christian book for boys.” ~ Amazon review

“I was guessing until the end of the book. I did not know who it was. Even adults will enjoy this book.” ~ Amazon review