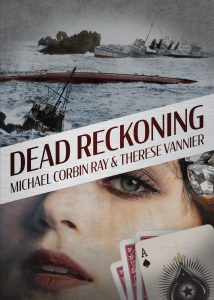 Sailor Emmett Haines is having second thoughts. His job on the destroyer Delphy is easy enough and his side hustle fleecing civilians with his much-practiced card skills brings good money to himself and his shipmates. But there has to be more to life than this. Then while on liberty in San Francisco he meets the free-spirited, enigmatic Ruby — a woman who seems to understand his game, and who opens up a new world of possibilities. The only catch now is that his ship is due to return to San Diego in the morning, and he’s under suspicion after someone steals a wallet from a close friend of his captain — an act that will have fateful, even fatal, consequences.

Inspired by the true story of a major U.S. Navy disaster off the coast of California a century ago — in which seven ships and nearly two dozen sailors were lost in a single night — Dead Reckoning imagines a mix of real and fictional officers, civilians, and low-ranking enlisted sailors from their adventures in Prohibition-era San Francisco up through the tragedy and its aftermath. The book brings to vivid life a little-known bit of history in a tale that is both exhilarating and heartbreaking.

Michael Corbin Ray and co-author Therese Vannier live in California not far from the turn of the coast that has sunk so many ships over the years. Dead Reckoning is their second novel.