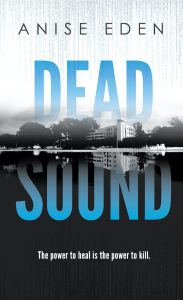 The tender scars on her abdomen throb as memories of the attack come rushing back, flooding her mind and sending her heart racing…

Psychotherapist Neve Keane knew that returning to work at the hospital after being stabbed by a patient would be difficult. But entering her unit only to be surrounded by a crowd of people claiming they need her help to stop the apocalypse—that’s more than she bargained for.

When the crowd’s leader turns out to be a mutual patient of Neve and her best friend, streetwise Irish doctor Cornelius O’Brien, they are both pulled into a Byzantine plot that transforms Capitol Hill General into a dangerous place where threats and betrayals lurk around every corner.

Then their mutual patient falls into a mysterious coma, and the clues he left behind lead Neve and Cornelius straight into Washington, DC’s ugly underbelly, a world of shadowy political forces with long arms and deadly intentions.

As they race to unravel the threads of a sinister conspiracy that leads from their hospital all the way to the White House, Neve and Cornelius realize they might be fighting to stop the end of the world, after all—provided they can survive the week with targets on their backs.

Gripping thriller and Page Turner Awards finalist DEAD SOUND, on sale for a limited time only!

ANISE EDEN is a psychotherapist-turned-author of multi-award winning suspense novels with thriller, romance, and paranormal elements. Originally from the US, Anise now lives in Ireland with her husband and her canine writing companion.