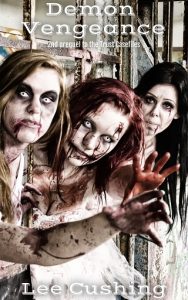 Forrest King and Catherine Jordan are best friends who just happen to be good at hunting and punishing those who have gotten away with hurting innocent victims. Their latest endeavour has taken them to Greece to deal justice to a group of mercenaries who escaped from charges of rape against two teenage girls, however this time their quest for retribution has put the lives of their friends in jeopardy because this time they are no longer dealing with human villains

Lee Cushing is a paranormal thriller author and a lifelong fan of the occult. Having become obsessed with supernatural folklore and the world of horror from an early age, Lee has spent years studying tales of the occult and immersing himself in stories of otherworldly phenomenon. He’s also the owner of a number of vampire and horror-related groups in Facebook, where fellow fans of the supernatural come together to celebrate and discuss all things paranormal.

His debut novel, Voodoo Mambo, blends high-stakes action and shadowy agencies with a dark underworld of demonic creatures and their insidious plots to attack humanity. Lee draws his inspiration from classic horror movies – including Hammer and Universal – as well as beloved TV shows including Doctor Who, Supernatural, The Avengers, and Buffy The Vampire Slayer.