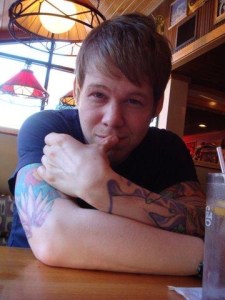 Tell us about yourself and how many books you have written.
I was born and raised in Sharon, PA, and moved to LA to try and do the whole get found and get noticed thing, which ironically, doesn’t really happen to anyone who moves to LA. It’s more like in LA, the people who are famous there already were famous before moving there, so the rest of us who want to get noticed that live in LA are just in the shadows of the famous people, working for them, and trying to be them. Thankfully, I didn’t really move to LA for that reason. It was more for family reasons.
I have a pet cat named Gachapin who hates everyone, literally. I have a young daughter who is my everything and the only person in this world I really feel like I want to get up everyday to see and be around. I hope she wants to be creative when she grows up, but it’s okay if she wants to be a janitor too. I will love her no matter what she decides to do in her life. Also, I’ve been reading books since I could read letters of the alphabet, but I’ve only written one book so far. I have ideas for about four more books, and currently I’m working on a massive trilogy about cryptids, the Pan Gu myth, and the end of the world which isn’t really the end of the world. It’s my Game of Thrones, as it has like 80 characters in it. So far, it’s going good.
My first book I’ll talk about in a second, but other than this, I should say I was in a famous band called From a Second Story Window, and I graduated from Penn State with a degree in counseling, which I never, ever want to do again in my life. Oh, and I code websites for fun.

What is the name of your latest book and what inspired it?
The name of my latest (and only, so far) book is KAI. I was working as a counselor in Chicago and had a discussion with my supervisor, who is one of the smartest men I have ever met, and he told me this idea about theta waves and how you are the most creative when you’re brain enters into a state of theta waves, particularly at the 7 megahertz level. All great ideas in this world can attribute themselves to somebody out there reaching this theta wave level.
So anyway, I thought to myself… what is you could create something to replace something you’ve lost?
KAI came from this kind of idea. It’s the story about a Japanese girl from Hiroshima who wants to destroy the world because of something terrible that happened to her. In order to write about her experience in a realistic way, I lived in Hiroshima for awhile and really inserted myself into the culture and what it’s like to be somebody living in Hiroshima on a day to day basis. I also drew upon my counseling experiences in Chicago to write about the second character in the book, a Korean woman who is a counselor in Evanston, Illinois, right outside of Chicago. The story I draw between them both is equal parts Haruki Murakami and Stephen King, and that’s all I’ll say about that.

Do you have any unusual writing habits?
I’m terrible with procrastinating, which is probably something not that unusual with writers, but with me, I write in massive blocks of intense writing, and then I’ll go a month and not touch what I’ve written. I hate writing this way, but that’s how I write the best things, it would seem.
Also, I’m a method writer, I guess you could say? When I write about something, even if it’s just one sentence about that particular something, I have to live it, breathe it, know it, and feel it. So for example, in the latest book I’m working on, there is a part that involves an ancient writing system that isn’t used anymore by anyone. I have not only researched every inch of this writing system, but I’m becoming fluent in it, so that I can accurately write a few parts in my book that talk about it. I do this for every inch of the books I’m writing, which takes an extraordinary amount of time to do, but I feel it’s worth it in the end, because my writing rings true to my ears when I do this. I hate when I read something and it’s obvious the person who wrote that something didn’t do their homework. It’s not fair to readers out there who want to experience something and not be lied to about that experience, which is what authors do when they don’t take the time to either research something they’re writing about, or find an imaginative solution to filling in the blanks about stuff they want to write about.

What authors, or books have influenced you?
So, so many authors have influenced me, as well as books, but a few that stand out include Haruki Murakami and his book, 1Q84, which is my all time favorite book by anyone, Ryu Murakami, Natsuo Kirino, Stephen King, Clive Barker, Asa Nonami, Banana Yoshimoto, and Brett Easton Ellis. These are just a few, and I don’t want to go too much into this simply because I could fill page after page of books and authors that have moved my soul.

What are you working on now?
Right now, I have about four books in the works, but they are only ideas on paper at the moment. The biggest book I’m working on is actually a trilogy about cryptids, the Pan Gu myth, and how the end of the world could really be the beginning of the world. It’s my Game of Thrones, as it has around 80 major characters in it. I’m about 200 pages into it.

What is your best method or website when it comes to promoting your books?
I use my own website to do alot of promotion, and also Facebook and Twitter and Goodreads. Beyond that, I’ve been trying to find and connect with a lot of bloggers out there who love books, I like to do giveaways with my books, and just overall, talk to anyone out there who wants to talk about books and my book, especially. I think being humble is the best way to promote anything, and also being persistent too. I’ve probably sent out over 1,000 requests for book reviews from bloggers and have got about 11 people who said they would do a review for me. 11…out of 1,000. So yeah, persistence is key.

Do you have any advice for new authors?
Persistence, as I just mentioned, is important, both in when you’re writing your books, and when you get them out into the world for everyone to read. Also, you have to get the idea out of your head that you’re going to be the next J.K. Rowling. She won the book lottery, as did most of the authors you hear about on TV or who get their books made into movies or TV Shows or whatever. Forget all that. Write a great story, believe in it, and share it with whoever is willing to read it, and be humble about it all. And you’ve probably heard this before… KEEP WRITING. Don’t stop. If you want to have a career as an author, you can’t stop writing. Think about it like this…. if you write 3,000 books, and each one of those books sells 1 copy as an ebook on Amazon a month, you’ve made around 3,000 dollars. That’s good enough for a 1 bedroom apartment and most of your bills, right? 3,000 books might seem like more than anyone can ever write, and I would agree, so even if you do a quarter of this, you might get a winner out of all those books you’ve written that sells 1,000 copies a month, so you don’t need to write THAT many. But if you got stories to tell, TELL THEM. That’s the best advice I can give new writers.

What is the best advice you have ever heard?
Never expect anything from anyone, and this way you’ll never get hurt. My one boss at a video store I worked at for ten years told me this. It’s still to this day the best advice anyone has ever personally told me.

What’s next for you as a writer?
I’m going to keep working on my trilogy and try to finish this, and also I’m doing research for my next three books as well.

What is your favorite book of all time?
1Q84, by Haruki Murakami. It’s a great love story that is embedded in Japanese flavored magical realism. It’s the size of a Bible too, which makes it a satisfying read when you finish it. And it’s weird. So, so weird, and in the best possible kind of way.