You are here: Home / Featured Books / Dialogues on Revelation with John the Apostle by Yann Opsitch 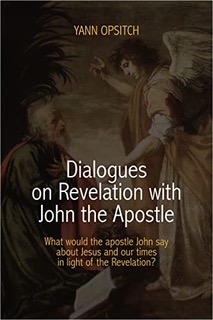 Dialogues on Revelation with John the Apostle by Yann Opsitch

Dialogues on Revelation with John the Apostle presents an imagined dialogue between the author and John the apostle, who just received a revelation from the Lord Jesus. Is it possible to know what John might have answered to some of our questions about the book of Revelation? It is possible since we have John’s Gospel, three of his epistles, and the Old and New Testaments. Would we receive the answers from John that we hope for or expect? Would we want more answers or different answers? I don’t doubt that this will be the case, for, as the apostle Paul exclaims, “Oh the depth of the riches and wisdom and knowledge of God!” (Romans 11.33).

Yann Opsitch addresses how the book of Revelation can help us view things from the perspective of eternity and of heaven. The heavenly perspective shown to John is one full of expectation and hope. However, the earthly perspective is often one of pain and struggle. John himself was exiled on Patmos and wrote to the churches in Asia who were undergoing difficulties both internal and external. He writes that he is their “partner in the tribulation and the kingdom and the patient endurance that are in Jesus” and who “was on the island called Patmos on account of the word of God and the testimony of Jesus” (Revelation 1.9).

The book contains 21 chapters, including “Fear Not,” “The Son of Man,” “A Door to Heaven,” “The Great Tribulation,” “The Mark of the Beast,” “Armageddon,” and “The Water of Life.”

Get This Religion Book.

Born in Versailles France in 1948, Yann got involved in theater and music at a very young age. His father, Glicha Opsitch, had served as an officer in the Yugoslav army and was a prisoner of war in Germany during World War II. His mother Sophie Gallois-Bonnal was the daughter of the French composer and organist Joseph-Ermend Bonnal. She was a professional pianist and piano teacher and assistante of Lazare Lévi for several years.

From 6 to 10 years Yann lived in New York with the painter Frank Mason and his wife Phyllis Mason-Harriman, also a painter. He took his first piano lessons in New York at the age of 7.

Back in France he spent a good part of his youth in Paris.

At the end of the sixties Yann intended for an acting career. He took theater lessons in Paris, including those of Patrick Antoine, and was able to act in a few plays and appear in the cinema.

But Yann had been in spiritual research for a long time. He gradually became interested in the life of Christ and the biblical message. After studying at the North Ireland Bible School (Belfast), where he was a pupil of Jim McGuiggan and other teachers. He was the founding editor of the journal Horizons Chrétiens from 1975 to 1990.

Yann Opsitch is the author of several works in French, including “Paroles du Christ sur la Montagne”, “En Esprit et en Vérité”, “La Sagesse et l’Adversité”, “Le Cœur et l’Invisible”, “Le Dieu de la Création et de la Révélation”. His most recent book in English “Let us Come Before his Presence: 365 days to learn, meditate and pray from the Psalms and the Sermon on the Mount” was published in the United States in November 2021 by Sulis International Press (Keledei Publications).

Yann is married to Rita, the father of three children and grandfather of six grandchildren.