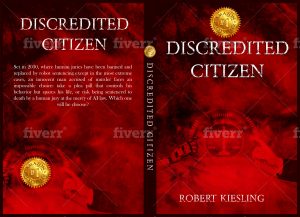 Logline: In an age where everything is controlled by artificial intelligence, an innocent doctor accused of a crime demands an old-style court trial with a mortal attorney… a trial that threatens to uncover a clandestine conspiracy that threatens all humanity.

Synopsis: Set in 2030 where artificial intelligence controls all facets of the criminal justice system and human lawyers have been all but done away with, a once-great trial lawyer, John Keys (30s) is faced with the harsh realities of this new system. Pushed over the edge, he commits an AI crime that lands him in prison with no hope of being set free. That is until his old partner, now the chief operations officer of Zon, the corporation that runs the smart city, gives him a way out by representing a doctor falsely accused of murder. All he must do is convince the doctor to admit guilt and take a plea pill to avoid a guaranteed death sentence. But when the doctor refuses to take the plea pill and demands a human jury trial, Keys discovers a conspiracy by Zon to cover up their heinous crimes against the human population to maintain control. His life now in mortal danger, Keys must figure out a way to expose Zon’s plan before they discover what he knows and delete him and everyone he loves forever.

Buy the book, and follow the author on social media:
Learn more about the writer. Visit the Author’s Website.
Buy the Book On Amazon.
Visit the Twitter page.

Author Bio:
Currently, I live and work as a trial lawyer in Austin, Texas. In the past decade, I’ve written five novels and two screenplays. I’m a member of the State Bar of Texas and also, I am a member of the Texas Bar College. When not writing or working, I’m a voracious reader. Works by John Grisham, Robert Greene, and Ray Bradbury are some of my favorites.