You are here: Home / Featured Books / DOG by Kevin Ramsden 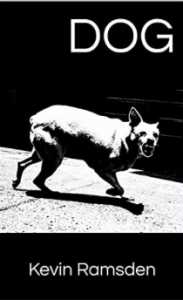 About DOG by Kevin Ramsden

The first five chapters of the book introduce the main characters through five inter-connected stories. Set in a town south of the city of London, UK, these stories attempt to capture the ease in which the most ordinary of actions and events, in the lives of equally ordinary people, can suddenly spiral viciously out of control. A cocky young drug dealer, greedy and ambitious, oversteps the mark and sets off a chain of events that will end in tragedy. A love starved single-mother nurse battles to keep afloat in a not-quite-love triangle. An ex-serviceman turned minder with a queen and country-sized chip on his shoulder plots revenge. A mentally challenged, psychopathic, Liverpool-born drifter, whose head is host to a tormenting spirit loses what little control he has left. And a seen-it-all, world-weary publican, friend to all, but going as nowhere as the barstool he is glued to, falls victim to his own good nature. This is the quintet of losers who fall foul of the least palatable aspects of human nature, but somehow manage to survive. In the fifth chapter, The Publican, circumstances bring together the Stranger, the Minder and the Publican in a scene of shocking violence as the Stranger seeks revenge on the young dealer, Wayne, who has unwittingly set the ball in motion by dealing a batch of deadly, tainted drugs to his junkie pal, Jason. Intent on finding and punishing the man responsible for his friend’s demise, the crazed Stranger rocks up in Wayne’s dad’s pub after tracking the young dealer to that location. However, before the Stranger manages to get his hands on Wayne, a short interaction with the bartender sets him off, and he unleashes a ferocious attack on the pub’s patrons. After just a few minutes of intense retribution, the Stranger has to flee the scene, leaving several people dead in his wake and both the Minder, Gary, and the Publican, Dennis as badly injured survivors.

In part two, the main protagonist, Wayne the dealer, has fled the chaos he created in his hometown and bolted to the south of France to find refuge in a summer job at a campsite in Juan Les Pins. However, unbeknownst to him, the murderous Stranger, has also made good his escape, and avoiding detection from the authorities has resurfaced in Marseilles a mere two hours distant, finding sanctuary within the Marseilles underworld. Here his particular talent for wanton violence is exploited by a top gang boss who introduces him to the world of high stakes street fighting and not knowing his true identity, gives him the fighting moniker of “Mad Dog”. Inter-gang rivalries surface around these sporting endeavors though, and Russian and Eastern European actors also become entrenched in the plot. By a cruel twist of fate, or coincidence, Wayne strikes up a friendship in a club with one of the fringe members of this world, and through this connection looks to enter the lifestyles of the rich and infamous. Wayne’s peace of mind and patience is stretched to the limit, however, when the trio of survivors from the carnage in the pub in England arrive. His father Dennis, The Minder, Gary, and the Nurse, Jen, are looking for a little R and R to help them recover from the physical and mental injuries they have received. But tempers fray and relationships become strained even under the warmth of the Mediterranean sun.

It is in part three when everything comes to a head though. Unable to curb his greed and ambitious tendencies, Wayne becomes embroiled in a dangerous game and makes a miscalculation of epic proportions involving one of the most lethal elements in the French underworld. A brutal, highly illegal, “fight to the death” contest at an upmarket villa owned by a Russian mafia chief is secretly filmed by Wayne, who is working the event as a waiter, a job secured for him by the Serbian playboy and gangster wannabee Vlado, who he has met in an Antibes club. Very naively, and rather stupidly, Wayne attempts to blackmail certain members of an organization that have arranged the event by demanding money in return for the sensitive footage. This unfortunate attempt to elicit funds from a criminal gang ultimately leads to the kidnap of Jen, the Nurse, and Dennis, as the mobsters seek to secure the return of the film without payment, and with every intention of eliminating Wayne. The final chapter of the book leads to an inevitable meeting between Wayne, Gary and Mad Dog, and as the reader is raced along to the final deadly showdown, old foes are forced to confront each other once more, and retribution is sought and delivered in a tense ending with a surprising twist.

Just a little about me. I was born into a working-class family in North London, UK, in 1959, but took off and spread my wings in my late teens to see more of the world. Thereafter, I have led a somewhat checkered working life in the UK, Europe, the U.S.A and Asia, engaging in a variety of jobs and pastimes, including hospital porter, laborer, driver, pub/hotel manager and cocktail bartender. Over the years, however, I have also managed to squeeze in studying for, and receiving, a couple of university degrees and other teaching credentials to keep me moving forward. Thirty years ago, I washed up on the shores of Japan, and have made the old capital Kyoto my home ever since, where I now teach at a university in the city.

With regard to my writing, I’d like to think my work would stand out from the crowd in two ways really. For one, a lot of what is in the stories is simply informed by my own life experiences and those of others around me. I also tend to write through the same voice that shares those stories and tales with friends and family on occasion and, in the diverse ex-pat community I live in, there are a bunch of real characters whose stories I am not averse to plundering. When not writing, I like to pursue my other passions of listening to great music, drinking fine New World wines, and complaining about the performances of my favorite football team in London, West Ham United.

I hope you enjoy reading my books as much as I do when writing them, and I’d be delighted to hear what you think of them.