You are here: Home / New Books / Doubtful Kiss (Book 1): A Love That Happened By Chance by Royana Hamilton 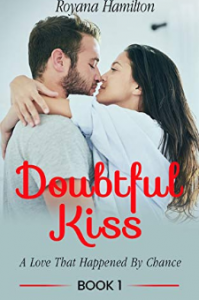 About Doubtful Kiss (Book 1): A Love That Happened By Chance by Royana Hamilton:

✔ Having nearly lost her career, she had suffered an uncomfortable breakup when her then-boyfriend and cousin started seeing each other.✔ Melissa’s painful experience from her previous relationship with Paul, and the insecurities that she developed as a result, begin to catch up to her.✔ While she is falling hopefully in love with Derek, she doesn’t want their relationship to be public for fear of losing her sanity and her career.✔ When a colleague spots them both together, Melissa’s insecurities come to the surface leading to a confrontation with Derek that threatens to break them apart.✔ Will her losing control tear her relationship with Derek apart? Will Derek break up with her for being obviously disrespectful and mean?✔ Now, what in the world Paul is thinking showing up on her doorstep?

Buy the book, and follow the author on social media:
Buy the Book On Amazon.
Author Bio:
Royana Hamilton is an author and housewife who was born and raised in New Zealand. Having left school with no real qualifications, Royana drifted through several jobs before she decided to change her life. Packing a rucksack, she decided to backpack from Sydney to Brisbane, but the experience thrilled her so much that she kept going, all the way to Darwin. From there she went on to travel through Indonesia and the Philippines and then into Southeast Asia.Back in New Zealand and ten years on, Royana had three children and was at a loose end for something creative to do with her free time and so decided to return to a childhood interest of writing. What started as a passing interest soon became an obsession and led her to write Fiction books.In her free time, Royana spends much of it with her family, enjoying the beach and water sports in particular. She is also an avid reader of romantic fiction and writes every day.She lives, with her artist husband, their three children, and two dogs, in a suburb of Christchurch on New Zealand’s South Island, and wouldn’t swap it for anywhere else.