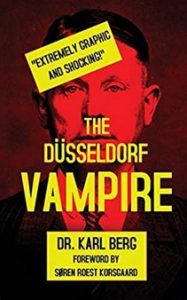 KORSGAARD PUBLISHING has republished Dr. Karl Berg’s timeless classic, THE SADIST. After his arrest, Peter Kürten, the Düsseldorf Vampire, allowed Dr. Berg to dive into his mind. The result was this book.
Never before has a serial killer spoken so openly and candidly about his murders, fantasies, and motivations. This book is a must read, but only for those who dare traverse the journey of the darkest of human behaviors.