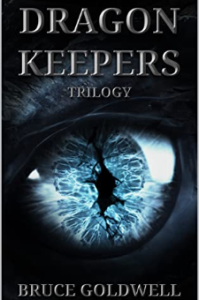 Goldwell’s fantasy book series Dragon Keepers can be considered a prelude for young readers before reading the Harry Potter series.  This urban fantasy series is imaginative and adventure-filled.

Dragon Keepers is a fantasy adventure series by Bruce Goldwell whose main character is Merlin the Wizard. It is written in third-person narrative. The narrative is about the fantasy life of Merlin which includes dragons, fairies, mermaids, unicorns, and other fantasy creatures popular in mythology around the world. While the story uses aspects of Arthurian legend, much of the story is based on fantasy characters and events made up by the author.

“The author has a very wise intention for choosing the fantasy world, a fantasy genre illustrates a gateway to stories and imagination that is beyond the narrow convention of this known world. The series will certainly allow the readers to escape from the reality and get back to the world of mystery. Through the characters, readers often find crisis, inequality, pain, and loss, those issues are valid and challenging ones that we are confronted with in our real world, whether as individuals or socially. More importantly, using the fantasy world, the author tries to engage more connectivity with those issues and instruct how to avoid them in a realistic setting.” – The Ritz Herald, Article April 2022

The journey of Bruce Goldwell did not start so happily compared with other writers, he was homeless for 10 long years. During that time, he used to visit bookstores to read self-development books written by famous authors like Bob Proctor, Brian Tracy, and many others. After reading these books, he wished he had learned these success principles when he was young.

Goldwell envisioned writing a story where readers of all ages could learn important life lessons through fantasy, mystery, and magic. People, especially the young age generation, love dragons and magic and for that reason, the author has decided to write a story with dragons along with fairies, witches, elfins, and other magical creatures. The author wanted to share what he has learned and was to the young readers ( middle grade and adults) so they would never end up being homeless.