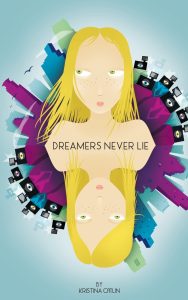 If there was one thing Sophie and Izzy hadn’t expected, it was the swarm of reporters waiting for them at their new school.

In Prairie Lake, being conjoined twins had been no big deal. They’d just been two girls, nothing more, inconsequentially stuck together.

But here, in the city, they were news. They weren’t just Izzy and Sophie. They were also the very abnormal daughters of Terra Tremaine, the legendary actress that had mysteriously left L.A. for Minnesota and hadn’t been heard from since.

Unfortunately, the paparazzi weren’t the only new arrivals in the twins’ lives.

There was Abby, the crazy great aunt who harbored a dark secret; there was Mr. Butler, the ethically-challenged donut-munching professor; and then there was Enrico, the peculiar son of an antiquated contract killer– a contract killer that wants someone close to them dead.

Kristina Catlin is a triplet and author from Minnesota who wrote this novel as a teenager while hanging out in coffee shops. She also has written a book for children, “Tino’s Musical Mousterpiece.”