You are here: Home / Fantasy / Druidry and the Beast By Cornelia Amiri 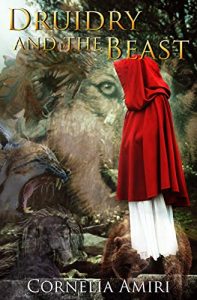 About Druidry and the Beast By Cornelia Amiri

Can these couples overcome the surmountable odds of a romance between mortals and immortals being anything more than a Celtic fire festival tryst? As the wheel of the year, flaming like searing desire both on Earth and the Otherworld, turns with the seasons from:

Samhain with God Gwydion, a wolf shapeshifter, and druidess Seren, as the sensual magic brewing between them could be destroyed by a warning of danger from beyond the grave

Beltane with God Dewey, a dragon shapeshifter, and druidess Nona, dealing with whatever evil the jealous chief might unleash on them

The Winter Solstice with God Artaois, a bear shapeshifter, and Druidess Bronwen, fighting to save her tribe from starvation

The Summer Solstice with Epon, a unicorn shapeshifter and druidess Maelona, as he battles the Romans to save her tribe

Cornelia Amiri was introduced through books, to the woman who became her favorite historical character, Boudica. The Celtic Warrior Queen motivated her to write professionally. Cornelia loves history and in reading a book about the dark ages, she came across the rebel queen. She inspired her so much, Cornelia started jotting down notes, but they were fiction, visions of her involvement in the Boudica revolt. Before she knew it, Cornelia had accidentally written a rough draft for a novel. And she’s been writing books ever since. She currently has over 40 published books, mainly in the Sci-fi Fantasy Romance genre.

When not writing, she loves to read, watch movies, and attend local comic cons. Cornelia is currently working on a sci-fi comedy romance series with a Celtic goddess as the heroine. The title is Rare Finds and it’s available in serries format, one episode at a time on Kindle Vella.