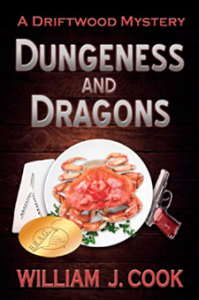 The pulse-pounding fourth installment of The Driftwood Mysteries.

When the crabbing boat Johnny B. Goode is lost with all hands in a ferocious January storm, Officer Charley Whitehorse, “The Tracker,” believes it was not an Act of God, but an act of murder.

At the same time, young women are disappearing up and down the Oregon coast. The latest, Patricia Carmody, has vanished without a trace on her way to audition for a movie.

As Whitehorse and his partner, Tony Esperanza, scramble to untangle the web of clues, they tumble into a plot of human trafficking, vicious killings, and international conspiracy.

Pour yourself a drink—coffee, tea, wine, or something stronger—turn off your phone, and fasten your seat belt. The ride is about to begin.

William Cook is a native of central Connecticut and grew up in the small town of Southington, midway between New Haven and Hartford. He has also lived in upstate New York, in and around Albany, and in Riverside, Rhode Island, on the shores of Narragansett Bay. In 1989 he moved to the Pacific Northwest.

His education began in a Catholic seminary in Connecticut and continued in another seminary in New York, for a total of eight years of study. He left the seminary with a Bachelor’s Degree in Philosophy, specializing in Existential Phenomenology (try saying that three times!). After doing his time for the draft board as a conscientious objector working as a hospital orderly, he attended the State University of New York at Albany, where he got a Master’s Degree in Social Work. He then worked as a mental health therapist for 37 years before retiring in 2011.

In 2014, he released his first novel, “Songs for the Journey Home,” which draws upon some of his experiences in the seminary. He sees it as a saga of spiritual discovery.

Many of his short stories first saw print in the yearly anthologies published by the Northwest Independent Writers Association. “The Last Refuge” was released in the 2015 Anthology, “Asylum.” Another, “The Paleographer,” appeared in “Artifact,” published in November, 2016. “The Affect Bridge” was included in “Bridges” in 2017. “The Girl on the Boardwalk” made its appearance in “Carnival,” released in November, 2018. “Bad Seed” was his entry into “Doorways,” which was published in November of 2019.

His novel, “Seal of Secrets,” was released in December, 2016. It begins The Driftwood Mysteries, a series of suspense/thrillers set on the Oregon coast. The second installment of these murder mysteries is “Eye of Newt,” a short story which made its first appearance in “Catch of the Day,”and is now available as a stand-alone mini-book. The third is “Woman in the Waves,” a novel published in November of 2018. The fourth is the novel “Dungeness and Dragons,” released in April 2020.

Cook feels his life has been extraordinarily blessed. He can now spend his time writing for pleasure and providing babysitting time for his grandchildren. (At last count, there were 15 grandchildren and one great grandchild!) His wife Sharon has retired from her job as a flight attendant and is an artist who displays her paintings and collages at Currents Gallery in McMinnville, Oregon, where she is an owner and partner with six other women.