You are here: Home / Humor / Effervescent Elixirol by Tracy Tomkowiak 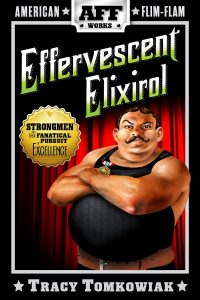 About Effervescent Elixirol by Tracy Tomkowiak

An offbeat tale of foibles, folly, and the drive to be the World’s Strongest Man.

He’s the champion weightlifter of his time…the Stout Powerhouse…the Germanic Juggernaut…the Great Reinhard! Unbeaten for years, Humbert Reinhard faces his greatest challenger yet and it couldn’t come at a worse time as his overworked body begins to betray him. Determined to uphold his title, he resorts to consuming a dubious quack medicine that promises to rejuvenate him but instead jeopardizes his future and further strains his relationship with his manager brother, Julius. Follow the Great Reinhard as he attempts to steer his fate from ruin to glory—risking life, limb and ligaments along the way.

Tracy Tomkowiak is the creator of the series American Film-Flam and the upcoming book, Canis. He likes to poke fun at some of our long-established institutions and cultural norms using biting humor and satire. But he also likes to write lighthearted stories about people’s everyday aspirations and disappointments as they make their way through life. Tracy is the publisher and jack of all trades for Alden Press Books, including the cover and art designer. He lives in the Chicago area.