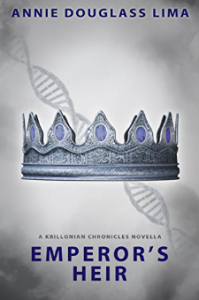 A late winter storm. An unexpectedly icy road. A limousine sliding, flipping, crumpling.
And just like that, Emperor Vandion is left without an heir, and the Krillonian Empire reels in shock and dismay.
Until they announce that there might actually be an anonymous heir out there … if he or she can be found.

Annie Douglass Lima considers herself fortunate to have traveled in twenty different countries and lived in four of them. A teacher in her “other” life, she loves reading to her students and sparking their imaginations. Her books include science fiction, fantasy, YA action and adventure novels, a puppet script, poetry, Bible verse coloring and activity books, and a cookbook. When she isn’t teaching or writing, Annie can often be found sipping spiced chai or pomegranate green tea in exotic locations, some of which exist in this world.